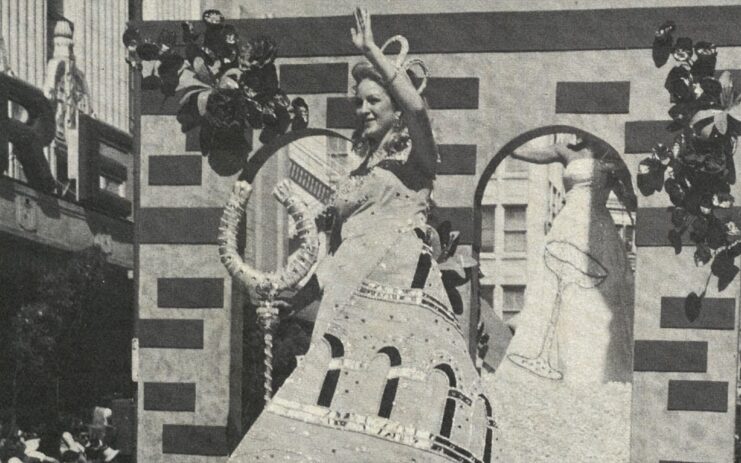 The First Battle of Flowers

By 1890, San Antonio, Texas, was a thriving trade center with a population of 38,000. In 1891 a group of citizens decided to honor the heroes of the Alamo and Battle of San Jacinto with a Battle of Flowers.

The first parade had horse-drawn carriages, bicycles decorated with fresh flowers and floats carrying children dressed as flowers. The Belknap Rifles represented the military. The participants pelted each other with blossoms.

The Battle of Flowers Parade is the only one in the country to be planned and directed completely by women. Today it’s the largest parade in Fiesta. It’s second in size nationally only to the Tournament of Roses Parade.

The Battle of Flowers was an immediate success. Within a few years, more events were taking place on or near April 21—a carnival, balls and coronations of “royalty.” The Fiesta tradition had been born. Other early events included street dancing, children’s festivals, a Trades Display Parade and an orphans party.

The Order of the Alamo 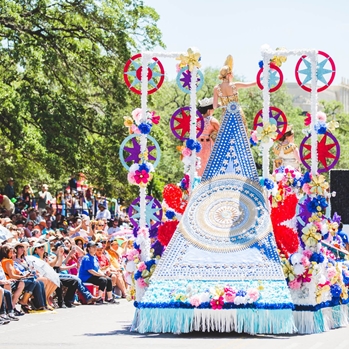 In 1909, John Carrington founded the Order of the Alamo, one of the oldest Fiesta organizations. The members meet once a year to choose the next year’s queen and her court. The queen’s court includes a princess, 12 in-town duchesses and 12 from out of town. This royalty is featured in the major Fiesta parades.

Claire Driscoll, patron of the Alamo, was the only person to serve as Queen of Fiesta for three years—1904, 1905 and 1906. Since then queens have served for only one year. Many people have speculated about the value of the elegant gowns worn by the queen and her court. Members of the Order say the costs are determined between the families and their dressmakers. So figures of $10,000 or more are just guesses by people admiring the beautiful dresses and trains.

The Pilgrimage to the Alamo

The Daughters of the Republic of Texas has staged its Pilgrimage to the Alamo since 1925. The pilgrimage is a memorial tribute to the Alamo heroes and the heritage of Texas. A solemn, wreath-bearing procession of historic, civic, patriotic, military and school groups walks silently to the Alamo.

At the same time, an announcer intones the names of the Alamo defenders from within the Alamo walls. The ceremony concludes with a brief memorial service. 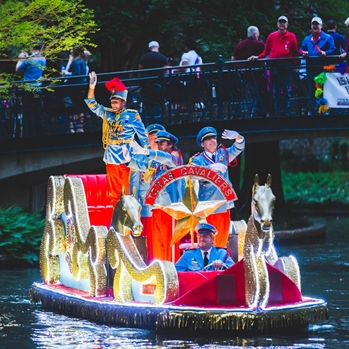 For years King Antonio had no set tradition for his official arrival at Fiesta. He used planes, trains and automobiles. When the Works Progress Administration completed improvements to the San Antonio River in 1941, the Cavaliers decided to introduce the king in a river parade—the first event to take place on the river after the improvements.

Today the River Parade is one of the few in the nation in which the floats really do float. About 250,000 people line the banks to enjoy the event.

The second king to reign over Fiesta is El Rey Feo, the “Ugly King.” This monarch comes from a medieval tradition in which peasants elected one of their own as king for a day. The first Rey Feo was crowned in 1947. He became an official part of Fiesta in 1980. The LULAC Rey Feo Scholarship Committee sponsors El Rey Feo.

Candidates for the title raise money that’s given to students for their college expenses. The emergence of two Fiesta kings built a bridge between both of the city’s major cultures. Both kings visit hospitals, schools and nursing homes in addition to making their appearance at Fiesta events.

The Fiesta Flambeau Parade began in 1948. The parade’s name comes from the French word for a candlestick or torch. In the event’s early years, four-man brigades marched between the other units, carrying torches on five-foot poles. Today Boy Scouts carry safety flares. All the floats in the Flambeau Parade are lighted.

A Night in Old San Antonio, better known as NIOSA, joined Fiesta in 1948. The San Antonio Conservation Society sponsors NIOSA. The society works to save San Antonio buildings and maintain the city’s cultural heritage. It takes about 16,000 volunteers each year to stage NIOSA.

Long-time traditions and other parades include: 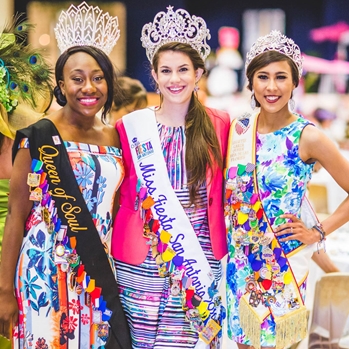 Over the years the number of Fiesta royalty fluctuated. Today, there are seven crowns designated as official Fiesta royalty. In addition to the Queen of the Order of the Alamo, King Antonio, and Rey Feo other official royalty includes:

With the immediate popularity of the “grandmother” of Fiesta events—the Battle of Flowers Parade—and other early activities, Fiesta soon needed someone to coordinate the festival. The Spring Carnival Association was established in 1906 to organize the festival. Some years later the Fiesta San Jacinto Association took over Fiesta responsibilities.

Even parties can have disagreements. In the 1950s dissatisfaction grew among many Fiesta organizations over Fiesta San Jacinto Association operations. In 1959 those groups withdrew from the association and formed a new one—the Fiesta® San Antonio Commission.

The commission works year-round to manage the thousands of details and day-to-day tasks essential to planning and executing the huge citywide celebration. It also acts as liaison between its nonprofit members, local military activities and city departments.

The commission provides funds for Fiesta events that are not financially self-supporting. The organization itself is funded entirely by the private sector and receives no direct city or other public funding. It relies heavily on membership dues, corporate partnerships, carnival income and licensed merchandise sales.

The Order of the Cascarón

As Fiesta San Antonio celebrated its centennial year in 1991, the Fiesta San Antonio Commission wanted to recognize the many volunteers who had given so generously to help make Fiesta one of the leading festivals in America. Marsha Hendler, with the support of The Plaza San Antonio Hotel and the San Antonio Express-News, created the Faces of Fiesta.  Each day for 100 days, The Express-News featured a Fiesta volunteer on its front page and highlighted his or her contributions. Then, those 100 individuals marched in The People’s Parade, a Centennial Fiesta kick-off event.

Robert W. “Bob” Carlson was so impressed, he wanted to make it permanent and, as the 1992 Fiesta Commission President, he created The Order of the Cascarón.  The Order would recognize and honor those volunteers who have made singularly outstanding contributions to Fiesta, taking it to a higher level.

Nine charter members were inducted in 1992:  Carol Canty, Nancy Clayton, Louis Engelke, Roger A. Flores II, James Gorman Jr., Bob Heckman, Naomi Russell-Wolfman, Logan Stewart  and Maximo Virgil. Since 1992, The Order of the Cascaron has inducted at least one new member each and every year.